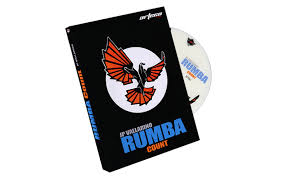 Rumba Count is a way to show the cards and give the impression that they have the same back, or the same face.

It was originally designed to hide the back or the face of the cards, and became a new classic count, replacing The Optical Hamman Count.

9 Tricks:
– The aces have a good back
– Cheaper cards
– English Poker
– The black fits you so well
– The Wild Card
– The Universal Card
– Wonderful Dream
– Rumba Print
– Rumba Color