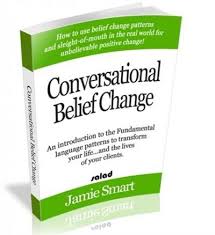 You may be aware that in August 2008 we launched a powerful new programme for learning Conversational Belief Change & Sleight of Mouth. It included the latest Salad language tools, including NLP Belief-Buster Cards, an innovative DVD programme, as well as a variety of audios and supporting documents.

Sleight of Mouth is a complex skillset, & involves more than just generating language patterns to see “what sticks”. It requires an understanding of human beliefs, & additional skills to ensure you don’t embed limiting beliefs even more deeply. For this reason, we’re really keen to ensure that the people who are serious about learning these patterns really learn how to use them effectively. So we’re including extra supporting materials to embed the learnings at the deepest level, so you can really understand how to use Sleight of Mouth & Conversational Belief Change for transforming your life, & the lives of others.

You’re going to learn how to…

Learn the legendary ‘Sleight of Mouth’ patterns quickly & easily (most people only learn this stuff after spending thousands on Master Practitioner training, & even then, only if they’re lucky!)

Achieve your goals & bring your dreams to life