Are you tired of chasing the mythical 12% return in the stock market? Or maybe you’re frustrated with sinking your money into real estate that doesn’t bring the returns they did a decade ago. And I sincerely hope you’re not letting your hard-earned dollars fester in a bank account that’s not paying even a full percent interest.

Owning your own billboards offers you the opportunity to create income literally from thin air (and you don’t need any fancy equipment, degrees, or expertise to get started.)…

No matter where the advertising and marketing world goes, billboards are a mainstay in today’s society. Whether you’re driving down a rural road, on the way to a hot vacation destination, or headed down your local highway, there will be billboards.

Someone owns that space. And someone gets paid handsomely for letting businesses use that space to attract their customers.

Why shouldn’t that someone be you?

But before I talk about the billboard business, I’d like to ask you a simple but frank question:

If you’ve got capital sitting in a bank account accruing around a 1% interest…your money isn’t working for you.

If you’re risking your hard-earned dollars in the stock market for a measly payout (and some hard losses along the way)… your money isn’t working for you.

If you’re flipping houses, buying businesses, investing in cryptocurrency, or any of the other million things out there but still not seeing a return on your time and money… then your money isn’t working for you and it’s time to look for something new.

You’ve worked hard for the money you have, and it’s time to put it to WORK. That means finding a way to grow your money to support the lifestyle YOU choose… without high risk, high initial investment, or even a lot of labor.

Or, you could stick with all the other options out there and spend endless time, money, and opportunity while your money just sits and never grows.

Which sounds more appealing? (I know which one I’d choose.)

Luckily, there IS a business that allows you to make your money work for you and grow.

Building your own billboard business requires very little start-up capital, a bit of legwork, and then you just sit back and relax while you get paid regularly.

Plus, it’s simple to get started:

You can find new billboard locations, and obtain ground leases and permits for them. You can then sell the ground lease and permit to other billboard companies (there are normally about two or three huge, public companies in every city) at phenomenal prices.

That’s right, you can buy a house from the proceeds of selling one un-built billboard location. And that’s not some boast from a cheesy late-night “get rich quick scheme” infomercial.

It makes sense for large companies to obtain their locations in this manner, and they are happy to pay big bucks for them.

Billboards return about 20% on your investment, which is significantly more than double what you’re going to earn from the stock market… and without all the labor-intensive work in traditional flipping.

The beauty of the billboard business is the complete lack of massive capital investment.

Even if you spend an entire week working full-time to search for a billboard location… you’re still out just a bit of time and a little gas money. And that’s only if you don’t find the right one.

Doesn’t that sound a lot better than waiting for your money to slowly grow in a bank somewhere?

And now, for the first time ever, I’m pulling back the curtain on how exactly to build your own billboard business from A to Z.

For the first time, you can access all the information I have in my brand-new Ultimate Billboard Investment Boot Camp.

This Boot Camp encompasses literally days worth of information that will show you step-by-step-by-step what to do to build your own billboard business.

First, you’ll get The Ultimate Outdoor Billboard Boot Camp Manual. This manual, a whopping 309 pages in length, will show you exactly how to find, secure and profit from billboard locations in your town. This manual has a value of over $997.00 on its own and is by far the definitive guide to creating your own billboard business from scratch… but it’s only ONE of the components of my Ultimate Billboard Investment Boot Camp. 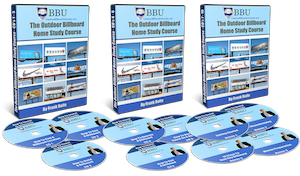 These audios will go in-depth on each topic so you can learn how to build your business on-the-go- in the car, during your workouts, or even while you’re sitting on a beach drinking a fru-fru cocktail.

Alone, these audios are worth $497.00… but they’re included as part of The Ultimate Billboard Investment Boot Camp.

Next, I’m also going to give you 15 full-length videos that will show you how to build your billboard business from scratch. This information is the same information that I provided in my in-person Boot Camps… but now you can access it without travel, time away from your family, sleepign in a lumpy hotel bed, or sitting in a freezing cold conference room frantically taking notes so you don’t miss anything.

You’ll be able to attend this Boot Camp from the comfort of your own home – and you can pause, rewind, and rewatch as many times as you’d like to make sure you don’t miss a single bit of information.

In this 15-video series, you’ll discover: 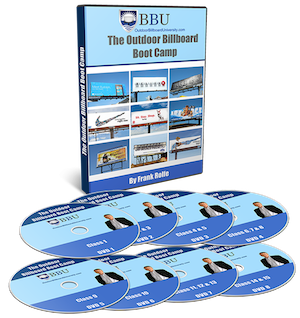 (Literally everything you need to know to run your own billboard business!)

This system will hand you the short cut that you need to get started… the short cut I wish I had in 1982 when I started my own billboard business.

Before I tell you what else is included with the Ultimate Billboard Business Boot Camp, I’d like to tell you why I’m the right person to be teaching you how to run this business. My name is Frank Rolfe, and in 1982 I graduated from Stanford University with a degree in Economics.

After the first year, I had three billboards, but I had a bunch more pending, so I decided to go one more year and try to get to an even ten. By the end of the second year I was already over ten and heading for twenty, so I delayed applying for business school for one more year. You can guess what happened. I never went to business school, and I just kept building billboards.

Not having any actual experience when I started, I had literally no idea what I was doing. But fortunately, I had some mentors along the way, particularly some guys at Foster and Kleiser (then the largest billboard company in the U.S.) who just couldn’t stand watching all the mistakes I was making. And I mostly learned through trial and error.

Back then, the competition in the industry was fierce, with over 60 billboard companies alone in Dallas (today there are less than ten). So I had to use my wits and creativity to beat the competition. Little did I know that those tricks and shortcuts would lead me to jump ahead of everyone. 14 years later, I was the largest private owner of billboards in Dallas/Ft. Worth, and sold out to Universal (now Clear Channel) for $5.8 million.

What did I learn from that experience? Certainly, I learned that there’s big money in billboards.

But I also learned that there are two ways to approach every task: the smart way and the dumb way. The smart way gives you the advantage, is highly efficient, and puts the odds in your favor.

The dumb way wastes a lot of time and rarely wins. By developing “smart” ways to approach the business, I was able to do some amazing things that nobody had done before, such as maintain an 80% rate of renewal, and a 100% occupancy rate for a decade straight.

The Ultimate Billboard Investment Boot Camp includes all of the “smart” theories I developed, as well as the reasoning behind them and how they work in real life.

(They must be “smart” as they turned a bunch of wood and metal into $5.8 million!)

Simply put: there is no other product on the market that will teach you
how to create your own billboard business from scratch
like The Ultimate Billboard Investment Boot Camp.

Now, the resources that I’ve already told you about:

Are more than enough to get you started the right way. But I’m not going to stop there.

Thank You For Ordering The Billboard Boot Camp

We want to thank you again for ordering The Outdoor Billboard Boot Camp In A Box.

Your copy of all the materials will be in the mail by the next business day. In the meantime, you can download all the digital files below.