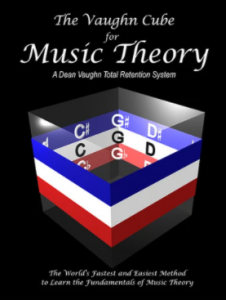 Get Dean Vaughn – The Vaughn Cube™ for Music Theory on sellercourse.com

Whether you are a beginner in music, play an instrument, sing, or write music, a thorough understanding of music theory is important for you. A grasp on the basics of music theory will help you, not only with developing your musical ability, but will also encourage a growing appreciation and love for music itself. Professional musicians spend years studying the fundamentals of music theory. The Dean Vaughn Cube TM for music theory can help you to learn the basics behind music theory in just a few short weeks.

This innovative and extraordinary method of learning can help you master the fundamentals of music theory in just seven hours of study. The music course contains four hours of video instruction; this combined with a few hours of coursework will allow you to learn (with a 100% retention rate!), music theory that can otherwise take years to master.

Some examples of what you will learn:

Examples of Questions you’ll be able to answer:

You’ll be able to answer these and around 3,000 more, including being able to spell any scale.

All this system requires from you is that you complete each video and coursework in order. If you do this without skipping through any of the lessons and without moving to the next lesson until you’ve mastered the previous one, you’ll be able to answer around 3,000 questions relating to music theory.

The Dean Vaughn Total Retention System is structured in such a way that it becomes easy to learn and retain this information in a short amount of time. Better still, you’ll be able to retain 100% of the information you learned even long after you have finished the course.

The Dean Vaughn CubeTM for Music theory differs from traditional methods of learning because it utilizes your brain’s natural ability to remember through visualization and association. This system uses a cube form, such as a room in your house, to organize and categorize information in such a way that is easy for your mind to access later. Since the information you are learning is presented in a way that the brain uses naturally, your retention is complete, and you are less likely to lose this information over time.