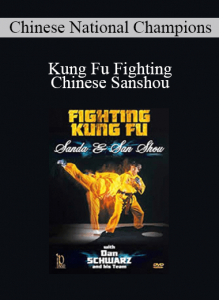 Only! It Stays Here! Your Kung Fu is pretty good… Me Chinese. Me Make Joke: Me hit you with a solid left-right punch combination to the body and then head, fake high with a kick and deliver a chopping shin strike low to your leg. One follow up stomp thrust kick to your chest, pull your face in for a knee hit and then crank your neck as I sweep your leg out from below you and drop you to the dirt! A few hits of ground and pound and you are OUT! BITCH! Stay Down! Sanshou has been gaining use as a base of striking skills for MMA fighters. Still to dethrone the old standards of Western Boxing (my choice) or Muay Thai, Sanshou does include one benefit (not inborn nativity in the other two) in that it already incorporates the use of takedowns and ground game into it’s overall mechanics. That and the fact that is is fucking awesome! This DVD sets shows GREAT combinations of strikes. Hits and counter hits from different positions (starting and those encountered later in a fight) which lead to three hit- or more- combos and then takedowns. The fighters show good pace and this is useful to study and drill on.

If you need to work on openings for strikes and angles of attack: Check it out.

This is Chinese Kung Fu Fighting! Known as Sanshou (meaning free hand), this highly effective method is practiced by millions of Chinese law enforcement, military and martial arts champions. Now you can learn from the very best, in the privacy of your own home. Demonstrated by many of the world s top fighters, each nationally ranked champions, including China s best, Li Shiying, gold medalist of both the World Games and the Asian Game Championships. This is the only English version of this informative instructional video, straight to you from China’s powerful fighters.

Disc 1 covers basics: Fist, Stances, Footwork, Punches, Fist combination and Leg Techniques. Each movement is broken down for easy learning. Coaching tips, training points and strategies are thoroughly discussed as each movement is shown both as shadowboxing and as an application.

Disc 2 covers fighting combination, throws and training: Fist and Kick combination, Throwing methods, Defense, Fist, Kick and Throw combination, Break Falls and Training techniques. Each movement is broken down for easy learning. Coaching tips, training points and strategies are thoroughly discussed as each movement is shown both as shadowboxing and as an application.

The throws are very practical. Of course this is NOT BJJ nor Judo. Still, what is here is accessible and works good tactically with the striking combinations shown. A short two hour DVD set. Still worth a viewing IMO.

Pee-Pee in your Coke is not included.

* What is included is a great training overview, good fight strategy and some core hitting and throwing skills. Great paced fundamentals are given as well as some conditioning sets and sequences which are based on using the moves of strikes, breakfalls and throws to train with.

*Nor any other terrible and horribly outdated, grade school racist taunts. Grow up! All can DL now. Enjoy!