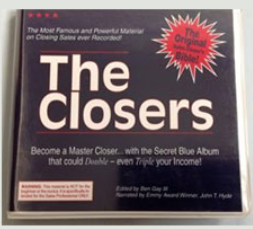 Get Ben Gay III – The Closers I & II on sellercourse.com

I initially was turned off by this book because it appears to be too much “old school.” Having now read the book and used many of the techniques, have noticed an increase in actual sales. If you can’t close, all you have done is had a conversation.

While some of the objections covered are not new, the manner in which Pickens responds is somewhat new and different. But that should come as no surprise since the author is a true master closer with decades of real world experience. Not someone hiding behind a managers oak desk.

“The Closers” is 10 chapters and 278 pages of powerful information. It includes the 20 greatest closes and 15 buyer objections and forty-five red hot closer responses.

Something that stood out for me occurred in the chapter on how a closer thinks. The author states that if you take out the letter “c” out of closer it spells loser. The “c” stands for confidence, compassion, control and courage. Strong point!

This is the 7 CD audio book of The Closers. Sells for 199. One of the best books ever written on closing. This is the Part I audio book.
“The Closers Part 1,” the keystone of Ben Gay III’s world-famous series of books, newsletters and seminars is the most powerful book on selling ever written. With over 2,000,000 copies sold since it was first published in 1980, it explains selling the way it really is, not the way some salespeople wish it was. If you have only one book on selling in your personal library, make sure it’s this “sales closers bible”! Comes with 7 CDs.