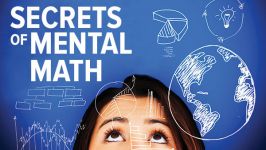 Get Arthur T. Benjamin – The Secrets of Mental Math on sellercourse.com

Most of us, when faced with math problems like these, immediately reach for a calculator or a pen. But imagine if you could perform these and other seemingly difficult—but surprisingly easy—calculations right in your head. Seems like an impossible feat? It’s not.

One key to improving and expanding your math potential—whether you’re a corporate executive or a high-school student—lies in the powerful ability to perform mental math calculations. Solving basic math problems in your head is a gateway to success in understanding and mastering higher mathematical fields such as algebra, statistics, and calculus. It’s a skill that offers other lifelong benefits, including

Mental mathematics also is valuable when you’re shopping for groceries or figuring out how much to tip at a restaurant. And perhaps the best part? Learning how to do mental math can be fun—especially when you’re learning in the company of Professor Arthur T. Benjamin of Harvey Mudd College, one of the most engaging and entertaining members of The Great Courses faculty. The Secrets of Mental Math, his exciting new 12-lecture course, guides you through all the essential skills, tips, and tricks for improving and enhancing your ability to solve a range of mathematical problems right in your head.

Mental math, as Professor Benjamin demonstrates, is not as daunting as it may seem. In fact, it’s an ability you already have—you just may not know it. Performing calculations in your head is all just a process of breaking down a large problem into simpler and simpler problems until it’s finally reduced to a single answer.

Assuming no detailed knowledge of mathematics other than what you learned in elementary school, Professor Benjamin has designed The Secrets of Mental Math to be accessible to anyone looking to tap into or strengthen his or her mental calculating skills.

In the first part of the course, you focus on specific strategies for performing the basic nuts-and-bolts operations of mental mathematics.

Dr. Benjamin fills each lecture with a wealth of practice problems to follow along with and get you engaged in the joys of mentally solving math problems.

Once you’ve gotten these four fundamental operations down, you then branch out into some interesting directions that continue to hone your mental math skills. Among the exciting skills you’ll develop are

And his accompanying course guidebook is filled with additional problems you can use to practice your newfound skills.

Throughout The Secrets of Mental Math, Professor Benjamin leads you through some fun—and memorable—techniques for tackling specific mathematical calculations. Here’s an example of one strategy he calls “Create a Zero, Kill the Zero,” helpful for determining the divisibility of any odd number that doesn’t end in 5.

An Encouraging, Rewarding Look at Numbers

But you’ll get more than just fun strategies to help make mental math easier. Learning with Professor Benjamin is like having a supportive coach right by your side—someone to encourage you, challenge you, and instill mathematical confidence in you. It’s this same teaching method that has won him a host of prestigious awards from the Mathematical Association of America, including the Deborah and Franklin Tepper Haimo Award for Distinguished College or University Teaching of Mathematics.

So prepare yourself for an unforgettable adventure in mental mathematics. Enjoyable, eye-opening, and immensely rewarding, The Secrets of Mental Math makes basic math quicker and easier than ever before. And it’s a powerful way to take your first, more confident steps into the intriguing—and undeniably fun—world of numbers.